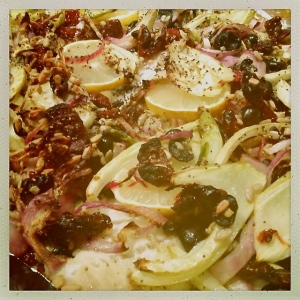 Given that this dish first made its way onto my cooking repertoire whilst on a long weekend break to Jersey, this dish is only as mediterranean as the sum of its ingredients. With my Nann’s old green beetle as a runabout I found the local fish shack, The Fresh Fish Company, that sits at the water’s edge and sells its wares literally as fresh as it could be, save for being sold off the back of the boat.

I had a mission to seek out one of my favourite fish and the shack delivered. Red mullett, so I’ve been told, was one of the most valued fish in ancient Rome. The mediterranean fish would be trained to come to feed at the call of a voice, and often caressed by their owners. They were often sold for their weight in silver. Perhaps the equivalent to the modern day Koi (coy) carp. I’m afraid my respect for mullet stems solely from my absolute love for the taste, and thankfully that is achieved at considerably less than the cost of silver. It has a firm texture and a sweet, nutty flavour with little oil content, so if you are going to replicate this look to find something similar with the skin left on, like red snapper or tarakihi.

The joy of this recipe is that it is put together in literally 5 minutes, but looks and tastes like it took forever. A winning combo!

To start, oven goes on to 180C. Line a large baking tray with foil and lightly oil. Lay the 6 fillets across the tray and season with oil, salt and pepper. Lay 6 of the lemon slices on on top of each fillet, add the ends to the tray. Next sprinkle the sun-dried tomatoes, olives, pine nuts, onion, garlic and if you feel like it, fennel slices on top of the fish. Drizzle the veg with oil, sprinkle the poppy seeds, and season. It goes into the oven for 20 minutes. That’s it. It really is that easy and you will look like a legend for your efforts. Goes nicely with steamed kale, steamed green beans with oil and garlic, new potatoes with parsley, or steamed spinach. 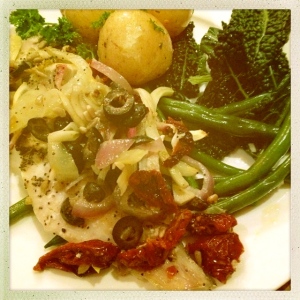 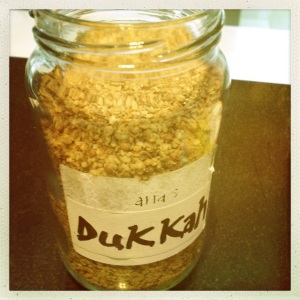 Egypt has been conjuring up images of revolution, of military intervention, of chanting crowds on Tahrir Square, of hope, islamic autocracy and unstable democracy. But it’s easy to forget life as normal with such imagery, of mothers chasing their little ones out of the pantry with shouts of rebuke, out the back door, down a sun crowned back alley as they dash away with a smuggled jar of mum’s finest.

Unlike za’atar’s competitive regional differences, dukkah doesn’t enjoy such incredible local distinction. But extraordinarily we can see a parallel with the palestinian pride in family recipes, in the huge variety of dukkah recipes on sale on the australasian shelves, 10,000 miles away from Egypt, and some distance away from the original recipe. All good stuff, though, and a great way to create a dry, nutty, herb flavour to your dish. On it’s discovery, I made a bumper batch and handed my additional lot out to friends as I loved it so much I thought I’d share the love. So here’s a quick recipe hint – try crusting your chicken in dukkah, and throw together a lemon, mint, parsley and quinoa salad.

Turn the oven on to 180C. On a baking sheet, toast the sesame seeds for 2 minutes, then give them a shake and stir and bake for another 2. Set aside your sesame seeds in a food processor, keeping the sheet and adding the hazelnuts and chickpeas for 3 minutes, stir and shake and then another 3. Add them to the food processor with the rest of the ingredients and blend. Traditionally, a pestle and mortar would be used to crush the ingredients, hence the name dukkah, which derives from the word meaning “to pound”.