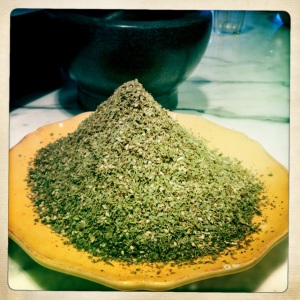 When I first visited the Middle East I was greeted with looks of disgust when I enquired what za’atar was. Only later did I find that I was taking to a Jordanian man of Palestinian descent, to whom za’atar is a social signifier of their household. Distinct differences in flavour will denote the area it is from and the particular family. Imagine, if you will, almost an entire region of za’atar ‘sommeliers’ pinpointing the vintage and domain. Now perhaps you can understand his shock at my ignorance. Ask a Frenchman what wine is and you might receive that similar sequence of emotions from shock, then confusion, drawing into a dawning enthusiasm of enlightening this future pupil with an education.

From then on I was showered with za’atar at every meal and all I could do was encourage it. It is divine. I was so enamoured with this herb mix that I brought 7 kilos back in my bag. One might say that my return at Christmas took on a middle eastern theme. So on arrival to New Zealand, I was sorely disheartened that I couldn’t find it for love nor money in even the most obscure shops so I started making my own.

Firstly, roast your sesame seeds in the over until brown. Then simply mix the ingredients together in a bowl. The more sumac you add the more citrus the flavour will be. Start with a little, and add to taste. This is really your biggest variable in the taste of the herb mix. Dip some bread into oil and then the za’atar, or top your hummus with it. I like to add it to my scrambled eggs as something a bit different.