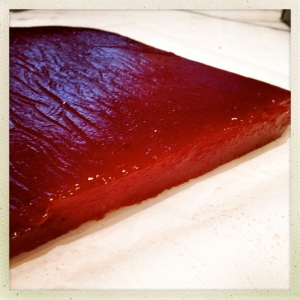 My surrogate Kiwi mother, Carol, (who is in fact American!) has been teaching me a thing or two in the kitchen over the last few weeks. Given the antipodean seasons we experience over here, it is quince season. That funny, oversized pear, that is too often overlooked.

I still can’t get over that we are headed for winter in April. I can only conjure up images of a dewy cider on Regent’s Canal in Islington on the first surprisingly hot day that the UK experiences before summer kicks in. Instead we are destined for declining temperatures and rain. We can’t complain after the hottest summer in 60 years. But what all this musing about seasons equates to, is that we have quinces now, the UK will have them in October/November.

You will reprimand me for the volume of sugar here, but this is really just to be sampled with a lovely dry cheese (e.g. Manchego). For me, the addition of quince paste (membrillo, to give it it’s original Spanish name) is to bring a fullness of flavour to your cheesy bite that will make your eyes roll to the back of your head. And for the trivia hungry amongst you, this was the original fruit used in marmalade.

Zest of an orange

You will need a couple of hours for this, so make it a labour of love for the presents you can make out of it, or the looks of pleasure you will create.

Firstly, top and tail the quince, setting the ends into a bowl. Then coarsely chop around the core, tossing the fleshy bits into a separate bowl. Now chop the core in half and if it looks healthy, throw it in bowl with the ends. If, however, it has moulded in the centre, throw it out.

Now place the ends and cores in a muslin, and tie it off. Place the quince flesh and vanilla pods in a saucepan, with the muslin in the centre, cover with cold water and bring to the boil. Boil steadily for 30-40 minutes.

Without discarding the water, vanilla pods or muslin, scoop out only the flesh and place in a separate saucepan.

Now add the orange peel and whizz with a hand blender until it is an even purée with no lumps. Once blended, gently heat the purée and add the sugar.

Here’s where the real love comes in. You need to set the heat on very low and stir almost continuously for approximately 40 minutes. If you stop stirring, the mixture becomes volcanic! After 40 minutes, the mixture should be an orangy colour and part with a wooden spoon so you can see the bottom of the pan clearly.

Line a 25cmx40cm baking tray with parchment and evenly spread the paste into it. Bake at 120C for 90 minutes until maroon coloured. Then leave to cool and set. Voila. 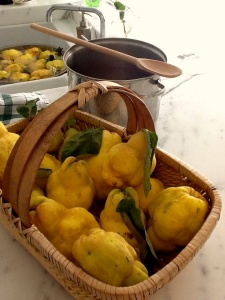 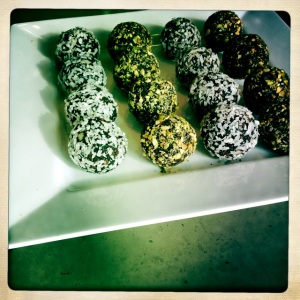 I am endlessly looking for something to forage from the kitchen mid-afternoon. If I’m not careful those snacks in the cupboard that I swear I didn’t buy will get it. But, with a deep breath, and a zen-like attitude, I keep my cool and remain committed to a diet that is sugar-free.

So, I’ve found the perfect answer. Cocoa truffles that  don’t have an ounce of refined sugar, just pure goodness. They keep for an age and they keep me going that age before the evening’s meal arrives. They are a synch to make, to boot. So move over KitKat, there’s a new kid in town.

This can be done with most seeds and nuts so whatever you have to hand you can substitute in,

You could throw this all in a blender together at once and whizz away, but I prefer to start with the seeds and cocoa together and whizz until they combine. Then add the coconut and salt and pulse again.Then I add the dates, pulse, then the water, and pulse until the mixture is smooth.

To make sure you have even sized balls, use a heaped teaspoon of the mixture at a time, take it in your palm and roll on a chopping board. Set aside until you have all the balls prepped. You can eat as they are, or to jazz them up, I like to chop more desiccated coconut up on the board and roll them on it to stick. You could do this with chopped pistachio, cocoa nibs, or crushed buckwheat. If you ‘bejazzle’ your truffles they make a cracking light dessert that will just top everyone off!